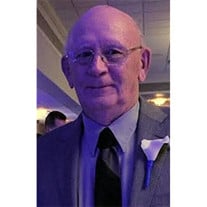 David Earl "Dave" Gilliland, 74, of Waterford, died Tuesday, November 15, 2016, at Riverside Methodist Hospital in Columbus, surrounded by his loving family. He was born January 11, 1942 in Reinersville to Dale Foster and Dorothy Rex Gilliland. He was a 1960 graduate of M&M High School. Dave had been employed as a welder for AEP, Muskingum River Plant. He had been an advisor for the Little Dudes 4-H Club; was a member of the Broken Wheel Riding Club and the Eastern Ohio Quarter Horse Association, being a founding member and serving as treasurer. Dave had been a member of the Waterford Community Fair Board. He was a member of Clemente Amitie Lodge #285, F&AM. His children, grandchildren and great grandchildren were his life. Dave is survived by his wife, Shirley Mae Greuey Gilliland, they were married on August 25, 1962; two daughters, Connie Miller of Seville, Ohio and Debbie Doebereiner of Waterford; five grandchildren, Dan (Danielle), Dale and Darcie (Levi Henry) Doebereiner, Jacob (Kari) and Nathan Miller; four great grandchildren, Ryan Griffith, Grayson Doebereiner, Bryce and Brooke Henry; a sister, Ruth Miller, of Newark and many nieces and nephews. He was preceded in death by his parents and two sisters, Esther Hoover Gesterling and Jo Eickel. Funeral services will be at 11:00 a.m. on Friday, November 18, 2016, at the Lowell Chapel of Cawley & Peoples Funeral Home with Dr. Lloyd Dennis officiating. Visitation on Thursday from 5:00 to 8:00 p.m., with Masonic Services at 8:00 p.m. Burial will be in Beverly Cemetery. Donations recommended to 4-H, Washington County Extension Office, 202 Davis Ave., Marietta, OH 45750 or to the Beverly-Waterford Township Rescue Squad, P.O. Box 223, Beverly, OH 45715.

The family of David Earl Gilliland created this Life Tributes page to make it easy to share your memories.

Send flowers to the Gilliland family.