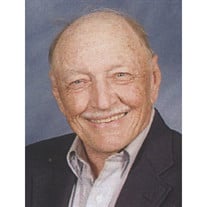 David Lee McKenna, 83, of Brentwood Street, Marietta, died Friday evening February 26, 2016, at Brookdale Senior Living, surrounded by family, where he had resided the past two years. Born September 8, 1932 in Marietta, he was the son of the late Wilbur "Toe" and Margaret Lee McKenna. David was a graduate of Marietta High School and Marietta College, where he was a member of Lambda Chi Fraternity. He had played baseball under Coach Don Drumm and had the experience of trying out for the Cleveland Indians. Having served in the Army, Dave was an active member of American Legion Post 64, having assisted with numerous Military Honors. He had retired as a systems analyst for DuPont, following 35 years of employment. He was a Past President of their 25 Year Club. Dave was a member of First Congregational United Church of Christ. He also was a member of B.P.O.Elks Lodge 477 and the Marietta Jaycees. Dave had coached Bantam League Baseball for several years and had been a volunteer at Marietta Memorial Hospital. He enjoyed fishing, golfing and bowling, having bowled a perfect 300 game. Dave was an avid Cincinnati Reds and Ohio State University sports nut. Survivors include his daughter Darca (Greg) Dickson, of Marietta; his son Patrick (Kelly) McKenna, of Bradenton, FL; and grandchildren Timothy (Nia) McKenna and Kayla McKenna, all of Bradenton. He was preceded in death by his wife, Patsy Louise "Pat" Kemp McKenna on June 15, 2008. They were married September 2, 1956. Funeral services will be held 10:30 a.m. Friday, March 4, 2016 at the First Congregational Church, 318 Front Street, Marietta, with The Rev. Linda Steelman officiating. Full Military Honors will be observed at his place of burial in Oak Grove Cemetery. Dave's family will greet friends on Thursday from 2-4 and 6-8 p.m. at the Marietta Chapel of Cawley & Peoples Funeral Home. It is suggested that memorial donations may be directed to the First Congregational Church, Marietta Bantam League Baseball, Marietta College Baseball, the Humane Society or American Legion Post 64...addresses are available at the funeral home. David's family would like to express their gratitude to his caregivers, nurses and aides at Brookdale, Dr. Cawley and Hospice.

David Lee McKenna, 83, of Brentwood Street, Marietta, died Friday evening February 26, 2016, at Brookdale Senior Living, surrounded by family, where he had resided the past two years. Born September 8, 1932 in Marietta, he was the son of the... View Obituary & Service Information

The family of David Lee McKenna created this Life Tributes page to make it easy to share your memories.

Send flowers to the McKenna family.