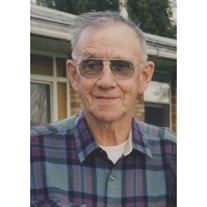 Donald Phillip Stewart, 95, a life-long Cincinnati Reds fan, was quietly traded to the angels Thursday, August 31, 2017. Patiently waiting for him in the dugout was his wife, Billie Dorothy Drumm, who married him July 3, 1945. Don was born Jan. 5, 1922, in McConnelsville, Ohio to Edward Hayward Stewart and Nancy Verna Francis Stewart. He was a 1939 graduate of Beverly High School. Don served his country in the Army during WWII, where he spent 17 months as a POW in a German prison camp. He retired from Central Ohio Coal Co. in 1986 after 25 year of employment as a foreman and heavy equipment operator. Don was a member of the Dungannon United Methodist Church, the Masonic Lodge and the Lowell American Legion. He enjoyed his retirement years traveling, golfing, gardening, making apple butter for the church and staying busy with his grandchildren. He is survived by his son, Jim Stewart (Ann) of Marietta; two daughters, Carol Cunningham (Dave) of Caldwell, and Mary Jo Sexton of Marietta; five grandchildren, Kristi Stewart, Tricia Wooten (Eric), Patrick Sexton (Jennifer), Jennifer Tatalovich (Travis), and Gregory Cunningham (Katie); nine great-grandchildren, Gavin Bowser Sexton, Marley Porter, Bleu Sexton, Cody Wooten, Tyler Wooten, Mason Tatalovich, Connor Cunningham, Claire Cunningham, Molly Cunningham; six step-grandchildren, Lisa Phillips (Roger), Belinda LaBar (Mike), Jonda Douglas (Randal), Misty Rummer (Brian), Jennifer Cliff ( David), and Jon Hackathorn (Deborah); his niece, Cindy Angle, who has been his constant companion and sidekick for the last ten years as well as step great-grandchildren, step great-great grandchildren, and many other nieces and nephews. He was preceded in death by his parents, wife, grandson Andrew Stewart; four sisters, Nina Wells, De Ette Clark, Beulah Stewart, and Glenna Misel; four brothers, Francis, William, Robert and Walter Stewart; and son-in-law Dan Sexton. Funeral services will be held at 10:00 a.m. on Monday September 4, 2017 at the Marietta Chapel of Cawley & Peoples Funeral Home, with The Rev. James Porter officiating. Burial will follow in Beverly Cemetery with full military honors. Visitation will be at the funeral home on Sunday from 2 to 4 and 6 to 8 p.m. Don's family would like to thank all those at Harmar Place who took such good care of him. Over the years he exchanged with them lots of stories, smiles, laughter and love. They became as much a part of his family as he did theirs.

Donald Phillip Stewart, 95, a life-long Cincinnati Reds fan, was quietly traded to the angels Thursday, August 31, 2017. Patiently waiting for him in the dugout was his wife, Billie Dorothy Drumm, who married him July 3, 1945. Don was born... View Obituary & Service Information

The family of Donald Philip Stewart created this Life Tributes page to make it easy to share your memories.

Send flowers to the Stewart family.