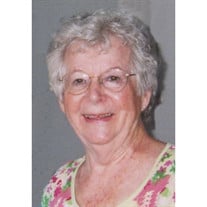 Doris Lorene Thomson, 91, of Marietta, Ohio, joined her family in Heaven on Wednesday, April 30, 2014, at Marietta Memorial Hospital. She was born October 9, 1922, in Amherst, NY, to Howard F. and Gertrude Fahning Voelpel. Doris graduated from Williamsville High School in 1939, married James A. Thomson on September 20, 1947, and moved to Marietta in June of 1970. She had worked for Columbus McKinnon Corporation and Remington Rand in Tonawanda, NY, then Dr. Curtis Dehmlow in Marietta. Upon her retirement, she worked for 30 years as the bookkeeper at Thomson's Landscaping, again retiring just two weeks ago. Doris loved playing scrabble and cards, crossword puzzles and one of her greatest loves was working in her flower garden. Until her last breath, she was looking out for her loving family, as she did all her life. She is survived by her son, Russell Thomson (Carol) of Marietta, two daughters, Anne Brown (Michael) of Williamstown, WV, and Martha Pickrell (Terry) of Cranberry Township, PA, seven grandchildren and three great grandchildren. She was preceded in death by her husband on September 14, 2002, sister, Grace Coleman and brother, Harold Voelpel. Private services will be held at the Marietta Chapel of Cawley & Peoples Funeral Home, with burial in East Lawn Memorial Park. In lieu of flowers, please make a donation to your favorite charity or plant a flower in your garden in Doris' memory.

The family of Doris Lorene Thomson created this Life Tributes page to make it easy to share your memories.

Send flowers to the Thomson family.