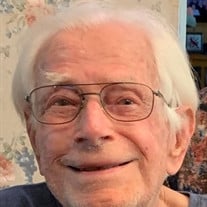 Earl “Whitey” Wagner passed away peacefully May 2, 2021 at Heartland nursing home surrounded by his family. He was born on April 1, 1921 in Marietta, OH, son of Herman W. and Kathryn Rice Wagner, and had recently celebrated his 100th Birthday. Earl was a graduate of Lowell High School in the class of 1939. He served in the US Army Air Corps from 1940-1945 and served in the Pacific Theater during WWII. After the war he was employed by the rural electric installing electric service to homes in rural Noble County Ohio. He then went to work for B.F. Goodrich in Marietta and retired in 1983 after 37 years. He was a charter member of Lowell American Legion Post 750 and had been a continuous member for 75 years. He was a member of St. John’s Evangelical Church in Lowell where he had served many years on the Church Council in various capacities. Earl was a wonderful musician and after his retirement he was a member of the music group Four Hits & A Miss who performed throughout the area. He later formed the Earl Wagner Band and performed at all the nursing homes in the area for many years bringing music and joy to the residents. Earl was an exceptional husband, father and grandfather and valued his home, his family and his Christian faith over all. He was preceded in death by his parents, brothers Karl Wagner, James Wagner, Walter “Gary” Wagner and sisters Jewel Burdette, Joan Young, Rosellyn Haynes, and Shirley Johnson, sisters-in-law Jean Warren, Virginia Wagner, Leanna Wagner, brothers-in-law Richard Burdette, Charles Young, sons-in-law Joseph Bonar, Adam Ruiz, nephews Steve Burdette, Reed Young, and niece Janis Wagner. He is survived by his wife of 70 years, Charlotte Fouss Wagner, whom he married on September 17, 1950; his daughters, Sharon Tali of Lowell and Kristen Bonar of Marietta; his two granddaughters, Kaitlyn Bonar of Columbus and Haley Bonar of Vienna, WV; his brother, Paul Wagner; and 16 nieces and nephews. He is also survived by “adopted daughter” and former exchange student, Martha Galindo Ruiz of Miami, FL and her two daughters Eva Gagnon (Matt) of San Jose, CA, and Alejandra Ruiz of San Francisco, CA and her grandchildren Ellie Rose and Adam Gagnon. Services will be held at 11:00 a.m. on Wednesday, May 5, 2021 at the Lowell Chapel of Cawley & Peoples Funeral Home, with Melody Hoskinson officiating. Burial will follow in Greenlawn Cemetery. Visitation will be on Tuesday from 2 to 4 and 6 to 8 p.m. Masks will be required and social distancing will be observed. In lieu of flowers donations may be made to St. John’s Evangelical Church in Lowell or the LA Fire Department. Cawley & Peoples Funeral Home is honored to serve the Wagner family and offers online condolences as well as many other resources by visiting their website, CawleyandPeoples.com.

Earl &#8220;Whitey&#8221; Wagner passed away peacefully May 2, 2021 at Heartland nursing home surrounded by his family. He was born on April 1, 1921 in Marietta, OH, son of Herman W. and Kathryn Rice Wagner, and had recently celebrated his... View Obituary & Service Information

The family of Earl W. Wagner created this Life Tributes page to make it easy to share your memories.

Earl “Whitey” Wagner passed away peacefully May 2, 2021 at Heartland...

Send flowers to the Wagner family.