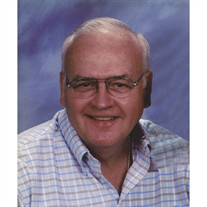 Gene Arthur Hendrickson, 67, of Marietta, Ohio, died Monday, May 5, 2014 at Heartland of Marietta. He was born on May 27, 1946, to Homer Bert and Mabel Rumbold Hendrickson. Gene was a 1964 graduate of Marietta High School and attended Marietta College. Years ago, he had worked for Bob Bingler Ford and Napa Auto Parts, and then in 1984 started working for Stowe Truck and Equipment, which later became Marietta Truck Sales and Service, where he was Parts Manager and later became General Manager, retiring in 2010. Gene was a member of the Marietta Moose Lodge #1823, he enjoyed neighborhood gatherings, and coin and gun collecting. Gene's family would like to thank his special caregivers at Heartland and the girls with Hospice for all their excellent care. He is survived by his wife, Christine A. Meagle Hendrickson, whom he married on October 7, 1978, three daughters, Ginger Brown (Dave) of Tampa, FL, Angela Gay Huck (Max) of Marietta and Geri Sobczak (John) of Tampa, five grandsons, Dr. Justin Eddy, Thomas and Jack Brown and Alexander and Daniel Sobczak, step granddaughter, Rachael Huck, sister, Ruth Mollohan of Waterford, Ohio, mother-in-law, Leona Meagle of Marietta, brother-in-law, Steven Meagle of Peru, Indiana, sister-in-law, Carolyn Hendrickson of Williamstown, WV, many nieces and nephews and his furry kids, Sophie, Emmie and Annie. He was preceded in death by his parents, brothers, Michael Hendrickson and Glen Reese and sister Carol Reese. Graveside services will be held at 11:00 a.m. on Thursday, May 8, 2014 at East Lawn Memorial Park, with Eugene Haught officiating. Visitation will be on Wednesday from 2-4 and 6-8 p.m. and from 9:30-10:30 a.m. on Thursday at the Marietta Chapel of Cawley & Peoples Funeral Home. Donations may be made to The Humane Society of the Ohio Valley, P. O. Box 5, Marietta, Ohio 45750 or to the Reno Volunteer Fire Department, P.O. Box 346, Reno, Ohio 45773.

Gene Arthur Hendrickson, 67, of Marietta, Ohio, died Monday, May 5, 2014 at Heartland of Marietta. He was born on May 27, 1946, to Homer Bert and Mabel Rumbold Hendrickson. Gene was a 1964 graduate of Marietta High School and attended Marietta... View Obituary & Service Information

The family of Gene Arthur Hendrickson created this Life Tributes page to make it easy to share your memories.

Send flowers to the Hendrickson family.