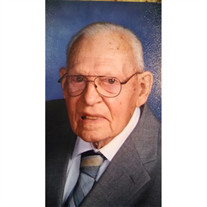 Harold Elwood Hall, 90, of Vincent, passed away Friday evening, September 19, 2014, at Marietta Memorial Hospital, surrounded by his loving family. He was born August 11, 1924 in Tanner, WV to Howard Arthur and Bertha Elizabeth McCartney Hall. Harold was a US Navy veteran serving on active duty during both World War II and the Korean Conflict. He retired from Pioneer City Casting in Belpre after 33 years of full time service as a machinist and later as supervisor of the machine shop and foundry. After retirement he continued to work part time for an additional 13 years. Harold spent many hours in his workshop creating woodworking projects. He also enjoyed gardening and home improvement projects. He was a member of the Lighthouse Baptist Church and the Bartlett Masonic Lodge #293, where he served as Master of his lodge in 1977 and 1983. He is survived by daughter, Carol Sue Kesterson (Lee) of Barlow, three sons, Charles Ronald (Karen) of Laurelville, Robert L. (Karen) of Belpre and William H. (Gale) of Barlow, five grandchildren, Lisa Mayle, David Kesterson, Michael Hall, Sarah Annis and Dana Hall, eleven great grandchildren, three sisters, Betty McGinnis, Delora Dent, and Carolyn Burkhamer, four step-children, thirty step-grandchildren and step-great grandchildren. Harold was preceded in death by his first wife of 59 years, Hazel Sandy Hall in 2002, his second wife of four years, Elma Prine Hall in 2008, and sisters, Jean Thorn, Virginia Lee Cox and Dorothy Marshall. A special thanks to step-grandchild Megan Moyers for her help and companionship during the last several years. Funeral services will be held at the Barlow Chapel of Cawley & Peoples Funeral Home on Wednesday, September 24, 2014 at 11:00 a.m. with Pastor Rob Vernon officiating. Friends may call at the funeral home on Tuesday from 5:00 to 8:00 p.m. There will be Masonic Services at 7:30 p.m. Burial will be in Veto Cemetery, with full military rites. Donations may be directed to a charity of the donors choice.

The family of Harold Elwood Hall created this Life Tributes page to make it easy to share your memories.

Send flowers to the Hall family.