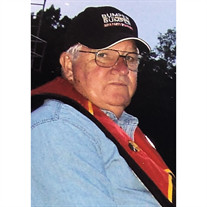 Harold Lee Hendershot, 82, of Lowell, Ohio, loving husband, father, grandfather and friend died on Wednesday, February 10, 2021, at Marietta Memorial Hospital after a battle with COVID-19. He was born on September 24, 1938 in Marietta, Ohio, to Wilbert Carl and Mariam Gladys Walters Hendershot. Harold was a 1956 graduate of Marietta High School. He worked in the engineering department at Airolite, retiring in 2006 after 50 years and continued with the company as an independent consultant after retiring. Harold loved spending time with his family and friends in the outdoors. He was a beloved member of the Pioneer Sams Camping Club and spent many hours fishing from his boat on Wolf Run Lake. He also had an appreciation for train and steam engines and frequently traveled out of state to show off his craftsmanship and admire others. He was a member of the Old Iron Club, Pioneer Antique Power Association, Stumptown Threshers Club, and was a lifetime member of the Tri-State Gas Engine and Tractor Association. To Harold there was nothing better than the company of his family and friends. He was a great conversationalist, never turned down a game of cards, and attended a "Wednesday Morning Meeting" nearly every week at the AM/PM in Marietta, OH. Those left to cherish his memory remember how he found interest in others, enjoyed a holiday gathering, and loved those closest to him. He is survived by his wife, Erma Jean Wolfert Hendershot, whom he married on October 4, 1958; three children, Barbara Mincks (Jerry), and Brenda Parsons (Eric); daughter in law, Le Ann Hendershot; four grandchildren, Andrea Hendershot (Nate Scott), Chad Parsons (Cynthia Austin), Sara Flood (Tyler) and Emily Kelley (Jake); two step grandchildren, Mechelle Wagner (Kyle Felty) and Stephanie Stille (Bill); two great grandchildren, Everette Flood and Ida Flood; five step great grandchildren; siblings, Martha Haught (Michael) and Alice Greene; sisters in law, Connie and Michelle Hendershot; and many nieces, nephews, in-laws and cousins. He was preceded in death by his brothers, Wayne and Dale Hendershot; son, Michael Hendershot; and brothers in law, Sam Camden and William Greene. Abiding with his wishes, cremation will be observed with no services at this time. Burial of ashes will take place in Salem Township Cemetery at a later time. Cawley & Peoples is honored to serve the Hendershot family and offers online condolences and many other resources by visiting their website, CawleyandPeoples.com.

The family of Harold Lee Hendershot created this Life Tributes page to make it easy to share your memories.

Send flowers to the Hendershot family.