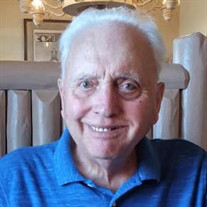 Henry “Nelson” Benedict, Jr., 85, of Cutler, Ohio, became the “perfect angel” he always claimed to be on Saturday, April 10, 2021. He was at his home, with his wife by his side, after a day of family gathering and reminiscing with loved ones when he succumbed to the Alzheimer’s Disease that had plagued him for many years. He was born on September 23, 1935 in Fleming, Ohio, to Lucy Marie Mercer Benedict and Henry Nelson Benedict, Sr. Nelson graduated from Marietta High School in 1952 and still attended monthly luncheons with his classmates. He attended Ohio State University for a year where he studied agriculture. He was a bus driver for 49 years, the majority at Warren Local Schools where he drove regular routes as well as many field trips and athletic activities. His retirement in 2005, returned him fulltime to his farm of 425-acres that had been his passion for his entire life. Nelson served as a Warren Township Trustee for over 30 years working diligently to improve his community. He was a member of Warren Chapel United Methodist Church until transferring membership in 2005 to Layman United Methodist Church after his move to Layman. He enjoyed involvement in Western Washington County Historical Society and Bartlett Senior Citizens. He was a loyal patron to the Silver Moon Diner, “the dairy bar”, and Bob Evans. Nelson loved eating out no matter the location. Nelson was most proud of winning the National Bus Drivers Rodeo in 1973, as well as having 27 state titles in this event. He told this story to anyone who was polite enough to listen and many of his friends and family heard this story repeatedly. He was also fond of telling stories of his life on the farm and the time his dad bought 1 more cow to give them an even 100 cattle in the barn. Nelson finally left his life as a farmer and retired on January 1, 2016 when he married Ella Palmer Bogard-Benedict. Though their marriage was brief they packed a lot of life and love into those 5 years, going on many adventures including a train trip to the Grand Canyon for a week. Nelson had two biological children, Stephanie Jane Daggett (Tom) and Henry Nelson Benedict,III (Callie); five step children, Deneen Henthorn, Brad Hackney (April), Phyllip Young (Nicollette), Meshaum Bogard, Sasha Velasco and Jeff Henthorn. He enjoyed spending time with his many grandchildren, Olivia Hounshell (Zach), Makenzie, and Tommy Daggett, Mariska and Mariah Benedict, Courtney Templeton, Austin, Andrew and Caidence Hackney, Megan Bleigh (Andrew), Katie Baltodano (Anthony), Jonathan Young (Katie) and Samantha Young, Mackenzie Bogard, Jacob Huhn and Jack Roark; great grandchildren, Garrett, Marco, Amelia, Eliana, Edwin, and Lillian Rose; and many nieces and nephews. Nelson is survived by his first wife Jane Place Benedict and last wife Ella Palmer Bogard-Benedict. He was preceded in death by his second wife, Patricia Moore Benedict; and siblings, Bonnie June Decker, Leona Slatzer, Paul Benedict and Ronald Benedict . The family wishes to recognize Barlow Volunteer Fire Department, Marietta Home Health and Hospice, and the wonderful staff at Marietta Memorial Hospital for their compassionate care and help with Nelson in his final year. We also want to extend a heartfelt thank you to Jacki Lauer and Stephanie Benedict for their constant help during Nelson’s final week on this earth. Funeral services will be held on Thursday, April 15, 2021 at 1:00 PM at the Barlow Chapel of Cawley & Peoples Funeral Home, with Pastor Lou Whitney officiating. Burial will follow in Warren Chapel Cemetery. Visitation will be on Wednesday from 2 to 4 and 6 to 8. Masks will be required and social distancing will be observed. Number of people in the funeral home at one time will be monitored. Donations in his memory may be directed to Layman United Methodist Church, Barlow Fire Department. or Warren Fire Department. Cawley & Peoples is honored to serve Nelson’s family and offers online condolences as well as many other resources by visiting their website, CawleyandPeoples.com.

The family of Henry Nelson Benedict created this Life Tributes page to make it easy to share your memories.

Send flowers to the Benedict family.