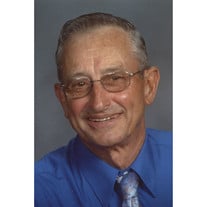 Howard Andrew Rauch, 86, of Lowell, Ohio, died, Monday, May 1, 2017 at his home, surrounded by his loving family. He was born on September 30, 1930 in Waterford, Ohio, to the late Ella G. Heiss and Leo L. Rauch. Howard attended Rainbow Primary and then graduated from Waterford High School. He served our country during the Korean Conflict, as a Sergeant in the 8th Army, 417th Engineer Aviation Brigade, from May of 1951 until February of 1953. Howard retired from Marietta Metals in 1992 as a sheet metal fabricator, after 44 years of employment with them. He was a member of Our Lady of Mercy Catholic Church, American Legion, Post 750, and was a 60 year member of L-A Fire & Rescue. He is survived by his wife, Jane Ann Rauch, whom he married at St. John's in Churchtown, on June 29, 1954; three sons, Stephen (Robin) of Pickerington, Ohio, David (Cathy) of Lowell, and Christopher (Donna) of Greenville, SC; 11 grandchildren, Andrew, Kyle, Megan, Nina, Matthew, David, Harrison, Sarah, Katie, Laura and Marie; five great grandchildren; brother, Paul Rauch of Devola; sister, Betty Russell (Ed) of Devola; and many nieces and nephews. He was preceded in death by his parents; sister, Helen Fliehman; and brother, Francis Rauch. Funeral Liturgy with Mass will be held at 10:00 a.m. on Friday, May 5, 2017, with The Rev. Timothy Shannon and The Rev. Msgr. John Michael Campbell con-celebrating. Burial will follow in the church cemetery, with full military honors being observed. Visitation will be on Thursday, from 2 to 8 p.m. at the Lowell Chapel of Cawley & Peoples Funeral Home. There will be a Vigil service held at 7:45 p.m. at the funeral home on Thursday. In lieu of flowers, donations may be made in Howard's memory to L-A Fire & Rescue, P.O. Box 406, Lowell, Ohio 45744.

Howard Andrew Rauch, 86, of Lowell, Ohio, died, Monday, May 1, 2017 at his home, surrounded by his loving family. He was born on September 30, 1930 in Waterford, Ohio, to the late Ella G. Heiss and Leo L. Rauch. Howard attended Rainbow Primary... View Obituary & Service Information

The family of Howard Andrew Rauch created this Life Tributes page to make it easy to share your memories.

Send flowers to the Rauch family.