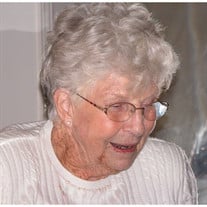 Irene Blake Calvin, 95, a longtime Marietta, Ohio resident, died peacefully on Wednesday, October 19, 2016 at Holzer Assisted Living, in Jackson, Ohio. She was born on March 22, 1921 in McArthur, Ohio to Cressie Cassill Blake and Asa Austin Blake. Irene was a 1939 graduate of McArthur High School. She was a homemaker and worked in the business office of Calvin & Calvin Construction Company and The Union Slag. Irene was a member of the First Presbyterian Church and the Marietta Country Club for many years, where she was the Women's Club Champion in 1980. She was a generous and thoughtful neighbor who enjoyed all the neighborhood activities, including hosting the 4th of July party in the Rathbone area. She is survived by her brother, Bob (Ann) Blake of Washington Courthouse, Ohio, sisters in law, Barbara Calvin Edwards of Worthington, Ohio, Nancy Calvin Lloyd of Lynn, Massachusetts, five nieces and nephews, Mike (Roberta) Yates, Kathy (Marshall) Thompson, Becky (Mike) Taylor, Shirley Eberts and Randy (Selena) Yates, all whom she helped raise, and many other nieces and nephews whom she made a positive impact in their lives as well. She was preceded in death by her husband, William Henry "Bill" Calvin, whom she married on January 3, 1949 and also preceding her is death are four sisters and four brothers. Graveside services will be held at 1:00 p.m. on Saturday, October 22, 2016 at East Lawn Memorial Park, with The Rev. David Smith officiating. Visitation will be on Saturday from 11:30 to 12:30 at the Marietta Chapel of Cawley & Peoples Funeral Home. Memorial contributions may be made to your local YMCA to help fund a youth swim program or youth golf.

The family of Irene (Blake) Calvin created this Life Tributes page to make it easy to share your memories.

Send flowers to the Calvin family.