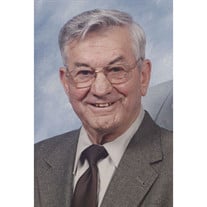 James Junior Lent, 88, of Lowell, died Tuesday, March 22, 2016, at Muskingum Valley Nursing Home in Beverly. He was born April 11, 1927 in Lower Salem to James M. and Elsie Moore Lent. Jim was a U.S. Navy veteran of World War II. He had worked at B.F. Goodrich and was a member of Lowell American Legion Post 750, VFW Post 5108, and was a member of Aurelius Lodge #308 F&AM, Macksburg. Jim is survived by a daughter, Vicki Biehl, of Marysville, a son, Bruce and wife, Lynn, of Lowell, several grandchildren and great grandchildren, a brother, Herb and wife, Loraine, of Cromwell, IN, two sisters, Naomi Okey of Coal Run, and Carol Blair (Gary) of Holly Hills, FL, and many nieces and nephews. Jim was preceded in death by his wife, Joy Lou Dunn Lent, and many brothers and sisters. Funeral services will be at 1:00 p.m. on Friday, March 25, 2016, at the Lowell Chapel of Cawley & Peoples Funeral Home, with Pastor Don Hart officiating. Visitation will be for two hours prior to the service on Friday. Burial, Greenlawn Cemetery with full military honors. Donations to L-A Fire & Rescue.

The family of James Junior Lent created this Life Tributes page to make it easy to share your memories.

Send flowers to the Lent family.