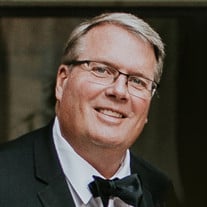 James (Jim) Aaron Roberts passed away July 7th 2020. He was born January 5th, 1963, to Paul James (deceased) and Beatrice Claire Roberts in Findlay, Ohio. Jim graduated in 1981 from Tippecanoe High School in Tipp City, Ohio, graduated with a Bachelor of Music degree from Miami University in Oxford, Ohio, in 1985, and continued his education at Marietta College in Marietta, Ohio, receiving his Master's degree in 1991. Jim was the assistant marching band director in the Warren Local School District from 1985 to 1994. He also directed the Warren High School pep and jazz bands. Throughout his tenure he taught music classes at Cutler, Bartlett, and Little Hocking Elementary Schools, as well as a variety of junior-high classes. Most recently he taught sixth-grade science at Warren Middle School. He was a long-time member of Christ United Methodist Church, playing trombone in musical services, teaching and participating in Sunday school, and serving on the board of trustees. He was an active member of the Boy Scouts Troop 231 as an adult volunteer and merit badge counselor. For many summers he managed the Devola Pool, putting on events that became summer fixtures for many families in the community. Along with his talent and passion for music, he was a patron of the Peoples Bank Theatre. As a member of the Marietta Soccer League Board, Jim was devoted to the development of youth soccer. On the field, he volunteered as a coach and referee; on the sidelines, he was a proud and loving father, cheering on his children during their games. A beloved hobby of Jim's was researching his family genealogy. He is survived by his wife of 32 years, Lou Ann Siegel Roberts, along with his children Matthew Roberts (Alexandra) of Bloomington, Indiana, Andrew Roberts (US Coast Guard, Sitka, Alaska), and Embrey Roberts; mother Beatrice Roberts; stepmother Shirley Roberts; brothers William Roberts (Melissa), David Roberts (Julie), Keith Roberts (Julie), and sister Brigitte Roberts, along with many nieces and nephews. Memorial contributions may be made to Christ United Methodist Church at 301 Wooster Street, Marietta, Ohio, 45750. A celebration of life will be held at a later date. The Marietta Chapel of Cawley & Peoples Funeral Home is honored to serve the Roberts family and offers online condolences and many other resources by visiting their website, CawleyandPeoples.com .

The family of James Aaron Roberts created this Life Tributes page to make it easy to share your memories.

Send flowers to the Roberts family.