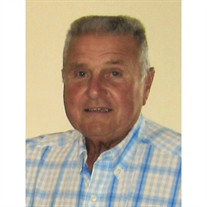 James Albert Schott, 77, of Marietta, Ohio, formerly of Frostyville Rd, in Lower Salem, Ohio, died on Friday, October 14, 2016 in Marietta. He was born on January 11, 1939 in Harriettsville, Ohio to Charles P. and Lenora Ullman Schott. Jim graduated from Elk Local High School in 1957, where he was a star basketball player. He was a United States Army Veteran, stationed in Ft. Hood, TX and served in Germany. Jim retired from The Airolite Company as Factory Manager. He was a past member of The Basilica of St. Mary of the Assumption, and current member of St. Henry's Catholic Church. Jim was also a member the American Legion, the Harness Horseman's Association, and the Washington County Fair Board for many years. He truly enjoyed the outdoors, including hunting, fishing and gardening. Jim is survived by his wife, Linda Browning Schott, whom he married on October 26, 1963, son, Rob Schott (Teri) of Green, Ohio, daughter, Joyce Schott of Delaware, Ohio, four grandchildren, Adam, Isaac, Bryn and Maryn, four siblings, Esther Hesson, Anna Mae Brooker, Nick Schott (Wanda) and Dean Schott (Joanne), and many nieces and nephews. He was preceded in death by his parents and five siblings, Hazel Barker, Doris Toole and Charles, Joe and Neil Schott. Funeral Liturgy with Mass will be held at 10:00 a.m. on Tuesday, October 18, 2016 at St. Henry's Catholic Church in Harriettsville, with The Rev. Timothy Shannon officiating. Burial will follow in East Lawn Memorial Park, with full military honors. Visitation will be on Monday from 2 to 4 and 6 to 8 p.m. at the Marietta Chapel of Cawley & Peoples Funeral Home, and for one hour prior to services at the church on Tuesday. Vigil services will be held at 3:00 p.m. on Monday at the funeral home. In lieu of flowers, donations may be made to St. Henry's Catholic Church, 36575 Church St., #47, Lower Salem, Ohio 45745.

The family of James Albert Schott created this Life Tributes page to make it easy to share your memories.

Send flowers to the Schott family.