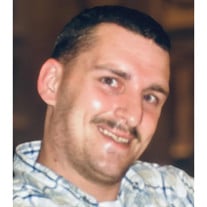 Jason Brooks Harper was born September 11, 1981, in Marietta Ohio to Catherine J. (Finkel) Harper and Michael B. Harper. He was so much more than his addiction and he fought 23 years with a 10 year reprieve to conquer it. He was an altar server, boy scout, academic award winner and Marine. Most of all he was a son, brother, husband, daddy, grandson, nephew, uncle, cousin, an animal lover and friend and he will be missed forever and we are changed forever. His smile, laugh, long talks on history and politics and his very essence will never fade from the memories of those who love him. So many stories and things he was proud of fill our hearts. He was proud of his stint in the Marines and the summer he worked for the city of Marietta. The street crew gave him a lime green shirt and he alternated between that one and the Marine shirt his little boy gave him for Father's Day during the 10 years we enjoyed with him. He took care of his Grandmother with Alzheimer's, carrying her, cleaning her and this tenderness will be remembered, too. Jason is survived by wife Teara, son Aamon, Austin and Aaron, his Mom and Dad; Cathy and Michael, sister Kaelly Erb (Joel) nephews Griffin and Elijah, niece Ruby; brother Matthew (Rylee) nieces Kolbie and Morrisyn; brother Stephen (Anna Claire Myers), maternal grandmother Joanne Finkel, uncles Tim Finkel (Dawn Hewitt) his sons Nick (Dani)( Veronica,) Ben; Kelly Finkel; Kevin Finkel; Chris Harper (Madison, Mason), Aunt Vicki (Harper) Bober (Mark), mother-in-law Brenda Eddy, numerous great aunts and uncle, cousins, friends. Jason was preceded in death by his baby brother, Samuel, by whom he will rest, Maternal grandparents Walt and Dorotha Finkel, paternal grandparents Brooks and Beverly Harper, Uncle Gary Lankford, great grandparents Dorothy and Bill Lankford, Audrey and John Rowan, Walter and Louise Finkel, Ernest Harper, aunts, uncles and cousins on both side of our families. "The most beautiful things in the world cannot be seen or even touched; they must be felt by the heart," Helen Kellar Thank you to our wonderful community who have reached out with cards, food, tender words and Cawley & Peoples, Brian Scharff, Father Mike Campbell and the Marine Corp League. Private graveside services were held. Donations may be made to The Right Path c/o Marietta Community Foundation in Jason's Memory to provide prevention services for Washington County youth. Cawley & Peoples is honored to serve Jason's family and offers online condolences by visiting their website, CawleyandPeoples.com.

Jason Brooks Harper was born September 11, 1981, in Marietta Ohio to Catherine J. (Finkel) Harper and Michael B. Harper. He was so much more than his addiction and he fought 23 years with a 10 year reprieve to conquer it. He was an altar server,... View Obituary & Service Information

The family of Jason Brooks Harper created this Life Tributes page to make it easy to share your memories.

Send flowers to the Harper family.