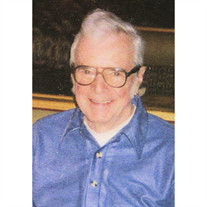 John P. Murphy, 88, of Marietta, Ohio, died Thursday, October 15, 2015 at Marietta Memorial Hospital. He was born on January 10, 1927 in Arlington, MA, to Patrick F. and Ellen Kavanaugh Murphy. John was a United States Marine Corps Veteran, in the Ninth AAA Battalion, serving in WWII in Guam, Pacific Theatre. He was a member of the Basilica of St. Mary of the Assumption, where he worked bingo for over 20 years, Knights of Columbus, Marietta, American Legion Post 64, VFW Post 5108, Disabled American Veterans, and IBEW Local 972 where he was an electrician for 60 years. He is survived by his wife, Bernadean Murphy, whom he married on May 21, 1979, one son, John P. Murphy Jr. (Isabel), one daughter, Sister Nancy A. Murphy, DC, two grandchildren, Lyle Murphy and Carly Murphy (Cayley), two sisters, Rita Kaspar and Kathleen Searles, one brother, Father Thomas Murphy, OFM, two stepsons, Donald McBride and Gale McBride (Janet), and many nieces and nephews. He was preceded in death by his first wife on December 14, 1976, Ann Finley Murphy, whom he married on June 3, 1950. Also preceding him in death are his parents, a brother, Edward Murphy and two sisters, Mary Rea and Eileen Kilroy. Funeral Liturgy with Mass will be held at 1:00 p.m. on Monday, October 19, 2015 at the Basilica, with The Rev. Msgr. John Michael Campbell celebrating. Burial will follow at East Lawn Memorial Park, with full military honors. Visitation will be on Sunday from 4 to 7 p.m. at the Marietta Chapel of Cawley & Peoples Funeral Home, with a Vigil service held at 4:30 p.m. The family would like to thank Drs. Kelli Cawley, Richard Cain, Umar Osman, the staffs at Marietta Memorial Hospital and Marietta Home Health and Hospice for their wonderful care and compassion. In lieu of flowers, please send a donation to Strecker Cancer Center at Marietta Memorial Hospital.

The family of John P Murphy created this Life Tributes page to make it easy to share your memories.

Send flowers to the Murphy family.