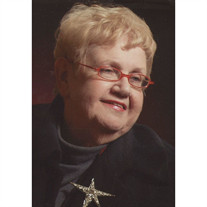 Karen Burton, 77, of Marietta, died Thursday, November 3, 2016, at Riverside Methodist Hospital in Columbus. She was born December 28, 1938 in Marietta to Thomas and Eleanor Ritchey McCurdy. She was a 1956 graduate of Marietta High School. Karen attended Morehead State University on a musical scholarship and received her BA in education, then went on to obtain her Master's in education at Ohio University. She was a first grade teacher in Washington, DC, then at Waterford Elementary, and at Barlow Vincent for 37 years. She was a member of Gilman United Methodist Church. Karen was a member of the Red Hat Society and the Retired Teachers Association. She was a current member of the Marietta City School Board and a past board member of the Washington County Career Center. She is survived by a son, Rusty Burton (Tammy) of Marietta; two grandsons, Mac and Henry Burton, and their mother , Cindy Burton; two sisters, Joanna Lupardus (Ron) of Bartlett and Christina Sloter of Marietta; a brother, Jon McCurdy (Cathy) of Morgantown, WV; an adopted brother, Jim Williams of Marietta, many nieces and nephews and her cat, Kitty. She was preceded in death by her parents and a brother, Thomas McCurdy. Friends may call on Monday, November 7, 2016, from 5 to 8 p.m. at the Marietta Chapel of Cawley & Peoples Funeral Home. There will be a memorial service held at 2:00 p.m. on Saturday, November 19, 2016, at Gilman United Methodist Church with the Rev. Diann O'Bryant officiating. The family will greet friends at the church for an hour prior to the service.

Karen Burton, 77, of Marietta, died Thursday, November 3, 2016, at Riverside Methodist Hospital in Columbus. She was born December 28, 1938 in Marietta to Thomas and Eleanor Ritchey McCurdy. She was a 1956 graduate of Marietta High School. Karen... View Obituary & Service Information

The family of Karen Burton created this Life Tributes page to make it easy to share your memories.

Send flowers to the Burton family.