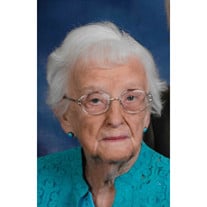 Kathryn H. Rose, 96, of Marietta, Ohio, died peacefully on Monday, October 15, 2018. Kathryn was born on September 15, 1922, in Marietta, the daughter of Leo and Lena Henke. She was a member of the Basilica of St. Mary of the Assumption, and a devout Catholic. A graduate of St. Mary Catholic High School in Marietta, Ohio, Kathryn was a devoted homemaker who loved to cook, can and bake. In her earlier years, she worked at Penney's (now JC Penney's) and sold Avon. She enjoyed traveling and never missed a game when her grandchildren were playing sports. Working in her flower gardens and attending to her roses gave her much joy. She was an avid quilter and card player. Kathryn enjoyed a family card game called "7 Up" and belonged to many bridge clubs over the years. She was always ready to provide a helping hand to neighbors and family. As a member of the Catholic Women's Club and supporter of the St. Mary School, she could be found working many fund raising events including fish fries. She was a loyal fan of Notre Dame, Ohio State and the Cleveland Indians. She married Jack Rose on February 19, 1944, and is survived by two sons; Richard (Maria) Rose of Houston, TX, and Daniel (Penny) Rose of Marietta. Four grandchildren, Stephen (Kelly) Rose of Pickerington, OH, David Rose of Wilmington, NC, Megan (Steve) Mangifico of Marietta, OH and Courtney Rose of Cincinnati, OH. Three great grandchildren, Hannah Rose of Houston, TX, and Jack and Emma Rose, of Pickerington OH. Three step grandchildren Corey Brown of Columbus, OH, Melissa Koops and Tina Good of Houston, TX, plus one step great grandson, Logan, of Pickerington, OH, along with several nieces and nephews and her sister-in-law Betty Rose, of Marietta. Kathryn was preceded in death by her parents, her husband Jack, a brother Herman Henke, and her sister Ella Mae Willson. Funeral Liturgy with Mass will be held at 10:00 am, October 18, 2018, at the Basilica of the St. Mary of the Assumption with The Rev. Msgr. John Michael Campbell as celebrant, with burial to be at the New St. Mary's Cemetery. Kathryn's family will greet friends at the Marietta Chapel of Cawley & Peoples Funeral Home on Wednesday, October 17 from 2-4 and 6-8 pm with a vigil service at 3:00 pm. The family suggests that memorial donations may be made to the Basilica, 506 Fourth Street, Marietta, Ohio 45750. The family would like to thank her caregivers, Theresa Hendershot and Hospice for their kind and compassionate care. A special thanks to her neighbors for always lending a helping hand.

Kathryn H. Rose, 96, of Marietta, Ohio, died peacefully on Monday, October 15, 2018. Kathryn was born on September 15, 1922, in Marietta, the daughter of Leo and Lena Henke. She was a member of the Basilica of St. Mary of the Assumption, and... View Obituary & Service Information

The family of Kathryn Rose created this Life Tributes page to make it easy to share your memories.

Send flowers to the Rose family.