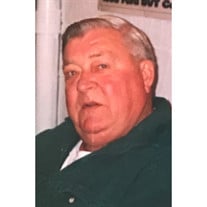 Larry Vernon Coe, 79, of Vincent, Ohio, died Sunday, November 5, 2017. He was born on September 15, 1938 in Parkersburg, WV, to Herman and Gladys Dowler Coe. Larry retired from Century Well Services as a well tender. He enjoyed NASCAR and fishing. He is survived by his wife, Christine Fairbanks Coe, whom he married on September 5, 1958; four children, Julie Coe, Dennis Coe (Laura), Sonya Coe and Darin Coe; eight grandchildren, Amanda, Logan, Morgan, Garrett and Chance Coe, Chase and Colten Pugh, and Shannon Hines; three great grandchildren; three siblings, Donald C. Coe (Sharon), Patty Adams (Bob) and Tom Coe; and many nieces and nephews. He was preceded in death by his parents; and three brothers, Eugene, Richard and Wetzel Coe. Funeral services will be held at 6 p.m. on Friday, November 10, 2017 at the Barlow Chapel of Cawley & Peoples Funeral Home, with Dr. Lloyd Dennis officiating. Visitation will be on Friday from 12 to 2 and 4 to 6 p.m. Donations may be made in his memory to the Alzheimer's Association.

The family of Larry Vernon Coe created this Life Tributes page to make it easy to share your memories.

Send flowers to the Coe family.