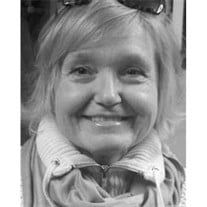 Mary Kelley Peyton, aka Mary Sue Kelley, of Williamstown, WV, passed away on Wednesday, October 21, 2015 at a way-too-young age of 66, but her one-of-a-kindness will be talked about for generations to come. Mary loved with every inch of her huge heart. She especially and mightily loved her family. An only child, she was adored and spoiled by her mother, Evelyn "Polly" Kelley, right until the end. Mary raised all four of her children with her twisted and sharp sense of humor. Her love of impulse retail purchases lives on in her daughter, Kelley Conner Lear (Mike Lear) of Richmond, VA who also got a large dose of her mother's sass. Her oldest son, J.T. "The Doctor" Conner (Darcy Conner) of Williamstown, WV was on the receiving end of her big brain and even bigger smile. Her son, Casey Conner (Katie Conner) of Asheville, NC, carries on her big heartedness and comedic-timing. The baby of the family, George Peyton (Jamie Peyton), also of Asheville, was raised by Mary in this family who loved to eat well and often and went on to become a bona fide chef. Mary's love for her children was rivaled by only one thing: Her love for her grandchildren who fondly called her Gam. She traveled many miles from West Virginia to all points south to answer the call of grandchildren in need of spoiling. Henry, Eleanor, Owen, Lydia, Violet, Frank, Holden, Lucille and Wesley will miss the endless stream of craft supplies, care packages and love that flowed from Gam's house. She also leaves behind two ex-husbands, Tim Conner and Harvey Peyton, who made the other loves of her life, her children and grandchildren, possible. Mary opened the doors to her home, her heart and her refrigerator to her kids' friends and was like a second mother to many who many who were lucky enough to cross the threshold of 8 Barbara Circle. Mary did have room to love other things too: Her friends, pumpkin-flavored anything, napoleons from Spring Hill Bakery, a tall glass of iced tea, British comedies on BBC, frog figurines, a good book and Bill Murray's underrated performance in What About Bob? She believed that Paul was (obviously) the best Beatle, that OJ was totally guilty, that every home should have a minimum of 3 Christmas trees and that you can never have too many shoes, scarves or cozy sweaters. Like most, she did have some things she didn't care for, among them: Yellow roses, Regis Philbin, the second George Bush and white asparagus. She was extremely disappointed to miss the final season of Downton Abbey, but now probably already knows how it ends anyway. Mary ran a rogue small scale import-export business transporting exotic spices, teas and organic vegetables across state lines for many years. And with characteristic generosity, she left behind her infamous recipes for German Potato Salad, Macintosh Cake, Herby Bread and Whoopie Pies. Preceding her on her next adventure were her father, Frank Kelley, her beloved dog, Bruno and her grandparents. Anyone who knew her, knew that it was hard to get her stopped once she started talking, so her death is that much more surprising to us all. Mary graduated from Stonewall Jackson High School and attended Butler University and the University of Charleston. She was an active member of First United Methodist Church of Williamstown. She was also a member of the Daughters of the American Revolution and got a real kick out of her patriot's name, Abednego Hodges. Heartfelt thanks for her care go out to her doctor and staff at Strecker, the staff from hospice, especially Jennifer and also to Lois, Lois, Ally and Erica. A memorial service to celebrate the most amazing mom/daughter/grandmother in the world will be held Saturday, November 28, 2015 at 4:00 PM at First United Methodist Church of Williamstown with a reception to follow at the Clubhouse of The Fields. In lieu of flowers, donations may be made to Strecker Cancer Center, Marietta, OH.

Mary Kelley Peyton, aka Mary Sue Kelley, of Williamstown, WV, passed away on Wednesday, October 21, 2015 at a way-too-young age of 66, but her one-of-a-kindness will be talked about for generations to come. Mary loved with every inch of her... View Obituary & Service Information

The family of Mary Sue Peyton created this Life Tributes page to make it easy to share your memories.

Send flowers to the Peyton family.