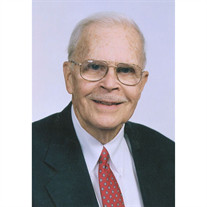 Norman Joseph Murray, age 96, a resident of Glenwood, Marietta, died surrounded by family at Harmer Place on January 13, 2014. Born in Marietta, November 4th, 1917, he was the son of A. Leight and Florence Zwiesler Murray. He married Josephine Bell (deceased), May 12th, 1941. He leaves one son, Norman Leight Murray (wife Jane). A daughter, Susan Murray, died in 1997. He leaves two grandchildren, Sarah Murray, PhD, and Andrew Murray, M.D. He also leaves five step children, and 17 step grandchildren, those of his surviving second wife, Margaret (Betsy) Murray, whom he married in 2000. He is survived by a sister, Virginia Murray Amrine. A brother, Robert Murray, Mrs. Amrine's twin, died in 2005. His youngest brother, Donald, died in Italy, during World War II. He is also survived by nephews Michael (wife Heike), Frank (wife JoEllen), John (wife Tonya), Patrick, Timothy (wife Laurie), James (wife Karen) and David Amrine, Donald (wife Debra) and Allan (wife Jeanette) Murray and nieces Mary Amrine Groves (husband Bill), Elizabeth Murray Middleton (husband David) and Elaine Murray Broderick (husband Rich). His nephew, James Murray, predeceased him. Mr. Murray was a 1935 graduate of St. Mary School, Marietta, and a 1939 graduate of Marietta College. He worked for The Airolite Company upon graduation from college and later became President and General Manager, retiring in 1986. He was a lifetime member of St. Mary Roman Catholic Church, where he was a long time member of the Finance Committee, and an altar server for 80 years. He was a member of the Knights of Columbus, a trustee of Marietta College from 1962 - 1980 and, more recently, a member of the John Cotton Society. He is a former Director of the People's Banking and Trust Company, and a member of Marietta Rotary Club, serving as President from 1958-1959. He was a member of the Marietta Country Club, where he was a top-notch golfer, playing with friends Dan Cawley, Roy Donnelly and other golfing greats. He, along with Hayward Strecker, Leonard Christy and Robert Kirkbride, was a founder of the Friday luncheon group, the Apostles. Funeral Liturgy, with Mass will be held at The Basilica of St. Mary of the Assumption, 506 Fourth St. at 2:00 p.m. on Saturday January 18th. Friends and family are invited to gather at Glenwood Retirement Community, 200 Timberline Dr. following the funeral service. Visitation will be at the Marietta Chapel of Cawley & Peoples Funeral Home from 4:00 p.m. to 7:00 p.m. on Friday, January 17th, with a Vigil Service at 7:00 p.m. Memorials may be made to The Basilica of St. Mary of the Assumption Restoration Fund, 506 Fourth St. or Marietta College, 215 Fifth Street, Marietta, Ohio 45750.

Norman Joseph Murray, age 96, a resident of Glenwood, Marietta, died surrounded by family at Harmer Place on January 13, 2014. Born in Marietta, November 4th, 1917, he was the son of A. Leight and Florence Zwiesler Murray. He married Josephine... View Obituary & Service Information

The family of Norman Joseph Murray created this Life Tributes page to make it easy to share your memories.

Send flowers to the Murray family.