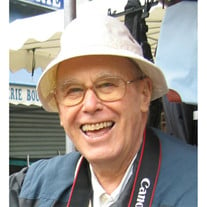 Former Marietta attorney and longtime resident, Richard J. Thomas, 89, passed away in Vero Beach Florida on Feb 25, 2016. He is survived by 3 children: Gregory Thomas (Kristin Ahlness) of Ithaca NY, Stephanie Guss (Jonathan) of Franklin Lakes NJ, and Johanna Theobald (Rick) of Mt Juliet TN; 6 grandchildren: Brendan Thomas, Eva Schlinger, Dylan, Samantha and Gillian Guss, and Justin Theobald; one great grandchild: Laylah Rose Marie Theobald; one sister: Joann Woltman of Delaware OH; and former wife RoseMarie Thomas of Marietta. Younger brother Henry Harlan Thomas, Jr. passed away in 2013. Born on August 22, 1926 in Columbus, Ohio Richard attended North High before enlisting in the Navy. During World War 2, he served in the Aleutian Islands and aboard the Liberty Ship SS Carl Schurz. At the end of his tour of duty he enrolled at Ohio State University where he received his BA in 1949 and his JD in 1951. Upon graduation Richard worked as an attorney for the Ohio Dept. of Liquor Control before moving to Marietta in 1955 to join the law firm of Summers and Haupt as an associate. In 1957 he started his own firm and practiced law in Marietta until retiring in 2000. Active in politics and the community, Richard was a longstanding Democrat. From the late fifties through the mid-sixties he served as Washington County Chairman for the Democratic Party, and attended the Kennedy Inaugural in 1961. He was selected as a delegate-at-large to represent the state of Ohio at the 1964 Democratic Convention in Atlantic City. He was an incorporating member of Washington Morgan Community Action in 1965, when it was formed as part of the national War on Poverty, and remained on the board until 1972. He served as counsel to the agency until his retirement. Locally, Richard also served on the board of the Red Cross. As local chairman of the March of Dimes fight against polio he was instrumental in getting free polio vaccine clinics up and running by intervening in the dispute in the medical community that was preventing vaccine distribution in the late fifties. At various times of his life he was an avid fly fisher, camper, runner, and award-winning amateur photographer. Bicycling was also a lifelong passion. He founded the Marietta Bike Club in the 1970s and was an early advocate of a bike path along Muskingum Drive into Devola. Among his many rides he completed the Tour of the Scioto River Valley (a 2 day 200 mile ride) numerous times and competed in Olympic time trial track racing for several years. Upon retiring to Vero Beach he enjoyed photography, taking walks over the Indian River, reading, and composing poetry. Even late in life with declining eye sight he was a voracious reader of biographies, thrillers, and most recently the sea-faring tales of Patrick O'Brian. There will be a visitation on Friday March 11 from 6-8pm at Cawley & Peoples, 408 Front Street, Marietta. A scholarship fund in Richard's honor has been created at Washington Morgan Community Action supporting students in the two counties. In lieu of flowers donations may be made to the Richard J. Thomas Scholarship Fund. Checks should be made out to the Washington Morgan Community Action Agency, and mailed to 218 Putnam Street, Marietta, OH 45750

The family of Richard Joseph Thomas created this Life Tributes page to make it easy to share your memories.

Send flowers to the Thomas family.