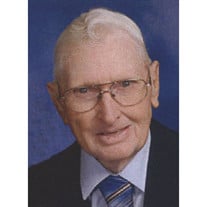 Robert "Bob" Eugene Farley, 88, of Marietta, died Friday afternoon, August 7, 2015, at Marietta Center. Born June 27, 1927 at Dalzell, he was a son of the late Robert Willis and Ida Belle Phelps Farley. Bob was a retired steelworker, having worked at Globe Metallurgical. He was a member of Local Union #6856 in Beverly and of the United Steelworkers of America Retiree's Club. He was a member of St. John the Baptist Catholic Church, the Holy Name Society and the Senior Citizen's Club, all in Churchtown. Bob enjoyed hunting, fishing and 'winning' at cards. On February 4, 1954, he married Frances Offenberger at Our Lady of Mercy Catholic Church in Lowell. She survives, with a daughter, Diane Lee-Trotter (Edward), of Marietta; two grandsons, Tristan Lee (Emily) and Brysen Lee (Gretchen); three great-grandchildren, Isaac, Aubrey and Greysen; a brother, Herbert Leroy Farley (Dorothy), of Marietta; a sister, Ruth Maxine Hughes, of Lowell; a sister-in-law, Evelyn Farley, of Marietta; and several nieces and nephews. Bob was preceded in death by brothers James and Clarence Farley and a sister Mary Kathryn Farley. Funeral Liturgy with Mass will be 10:00 am Wednesday, August 12, 2015, at St. John's Catholic Church with the Rev. Virgil Reischman and the Rev. Msgr. Robert Kawa as concelebrants. Burial will be in the church cemetery. A Vigil Services will be held at 3:00 pm Tuesday at the Marietta Chapel of Cawley & Peoples Funeral Home, where the family will greet friends from 2-4 and 6-8 pm Tuesday. Bob's family would like to express special thanks to the nurses and aides at Marietta Center for the excellent care given to Bob. It is suggested that memorials may be directed to St. John's School Foundation, 17784 St. Rt. 676, Marietta, OH 45750.

The family of Robert Eugene Farley created this Life Tributes page to make it easy to share your memories.

Send flowers to the Farley family.