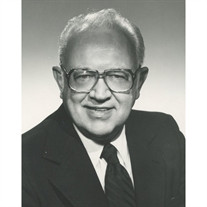 Robert Spencer Peoples, 74, of Lowell, Ohio, died Sunday, September 4, 1988 at Riverside Methodist Hospital in Columbus, Ohio. He was born on August 13, 1914 in Cadiz, Ohio to Lorenzo Corwin and Naomi Beatrice Olmstead Peoples. Bob moved to Lowell in 1947 from Cadiz. He owned and operated Peoples Furniture Store and Peoples Funeral Home for 35 years and at the time of his death was Vice President of Cawley & Peoples Funeral Homes. Bob was a graduate of the Cleveland College of Embalming, and had been a licensed funeral director for over 50 years. He was a member of St. John's United Church of Christ, in Lowell, where he had served on the church council and various church committees. He had been a member of various Masonic bodies, including Lowell Masonic Lodge, #436, F&AM, Lowell Chapter #272, Order of Eastern Star, and he also was a member of Buell Lodge #395, Knights of Pythias, in Lowell. Bob was a member of the Ohio and the National Funeral Directors' Associations, and a former President of the Lowell Board of Education. He is survived by his wife, Beula Moore Peoples, whom he married on November 15, 1938; four children, Marilynn Scharff (Fred), R. Donovan Peoples, William C. Peoples (Patricia) and Richard A. Peoples (Judith); seven grandchildren; one great granddaughter; brother, Frederick C. Peoples; and many nieces and nephews. He was preceded in death by his brother, Philip Peoples; step mother, Jessica Peoples; and step brother, Charles McLaughlin. Funeral services will be held at 10:30 a.m. on Thursday, September 8, 1988 at St. John's United Church of Christ, with the Rev.'s Keith Mills and Judith Bain. Burial will follow in Greenlawn Cemetery. Visitation will be on Tuesday, from 7 to 9 p.m. and Wednesday from 2 to 4 and 7 to 9 p.m. at the Lowell Chapel of Cawley & Peoples Funeral Home, with Masonic services at 7:30 p.m. on Wednesday. The family suggests that donations may be made to a charity of the donor's choice.

The family of Robert Spencer Peoples created this Life Tributes page to make it easy to share your memories.

Send flowers to the Peoples family.