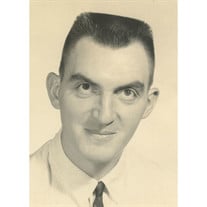 Robert Loring Pugh, 79, of Vincent, died Tuesday, June 30, 2015, at Marietta Center. He was born August 11, 1935 in Barlow to Lewis D. and Katie Margaret Deming Pugh. Bob was a graduate of Marietta High School and received a BS from Salem College. He was a Korean veteran, serving with the U.S. Marines from February, 1954 to February, 1962. Mr. Pugh was a history teacher at Fort Frye High School, retiring in 1985. He was a member of the American Legion, Post #389, Washington County Farm Bureau, the U.S. Trotting Association and had served as treasurer and secretary of the Ohio Harness Horseman Association. He is survived by his wife, Patricia H. Doudna Pugh. They had been married on June 11, 1967 in Caldwell. Also survived by two daughters, Jennifer Dailey (Sandy) of Barlow and Rebecca McClain (Terry) of Chillicothe and four grandchildren, Andrew, Ben, Anna and Ella Dailey. Preceding him in death were his parents, brother, Jim, sister, Mona Pugh, and step mother, Margaret. Funeral services will be held at the Barlow Chapel of Cawley & Peoples Funeral Home on Saturday, July 4, 2015, at 10:00 am, with Pastor Jeff Hancock officiating. Friends may call on Friday, from 2-4 and 6-8 pm. Burial will be in Barlow Central Cemetery, with full military honors. Donations may be directed to the Robert Pugh Scholarship Fund, in care of Citizens Bank, 8515 St. Rt. 339, Barlow, OH 45712. Robert was much beloved by his family and students for his kindness and generosity. He worked hard, never complained, and always tried to do the right thing.

The family of Robert Loring Pugh created this Life Tributes page to make it easy to share your memories.

Send flowers to the Pugh family.