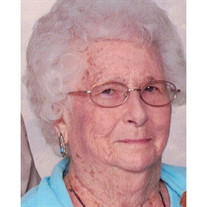 On the morning of August 29, 2018, Ruth Trotter left her earthly body behind to join her husband of nearly 72 years in heaven. Ruth was born to Frank W. and Edna Lenore Flowers Smith on a farm near Vincent on September 28, 1923. She graduated from Barlow Rural High School in 1941 and attended Office Training School in Columbus and was employed by the Ohio State Farm Bureau Insurance Co. Ruth and Dennis E. Trotter, her high school sweetheart, were married March 28, 1943, in St. Louis, while he was serving with the Army Air Corps. She followed him from base to base until he was sent to Europe with the 15th Air Force, 97th Bombardment Group during WWII. Returning to Vincent, they started a family. Always a mother, Ruth was a 4-H leader, a Cub Scout den mother, and a band booster at Warren High School. While the children were young, they enjoyed many years together traveling and camping. Ruth and Denny traveled throughout all 50 states, Mexico and Canada. In retirement they created and sold jewelry at craft shows in Ohio and West Virginia. Together they helped start the Ohio Valley Rock & Mineral Club and were members of the Vincent and Layman United Methodist Churches, Beverly American Legion Auxiliary Unit 389 and the Western Washington County Historical Society. Denny passed away in January 2015, and Ruth was loved by her four children, Marie Nutter (Ken) of Vincent, Marti Lohr (Jim) of Niceville, FL, Ed (Diane) of Marietta, and Randy (Sue) of Lowell; eight grandchildren, Gary Nutter of Webster, TX, Christine Nutter Dearth of Vincent, Tonja Lohr Sowers of Ft. Walton Beach, Fl, Michael Lohr of Keller, TX, Angela Trotter Patton of Woodstock, GA, Rachel Trotter Schuttinger of Powell, Sarah Trotter Wells of Beavercreek, and Greg Trotter of Fleming; four step grandchildren, Tristan Lee of Columbus, Brysen Lee of Marietta, Stephanie Hupp and Marla Mankins of Lowell; several great grandchildren and great-great grandchildren. Great grandson Stephen Gebert, and step grandson Steven Mincks, are deceased. Memorial services will be held at 11:00 a.m. on Tuesday, September 18, 2018 at the Barlow Chapel of Cawley & Peoples Funeral Home, with Pastor David Hubbard officiating. Burial of ashes will be in Veto Cemetery at a later time. Visitation will be at the funeral home from 6 to 8 p.m. on Monday, September 17th. Donations may be made to the Barlow VFD or to The Humane Society of the Ohio Valley.

On the morning of August 29, 2018, Ruth Trotter left her earthly body behind to join her husband of nearly 72 years in heaven. Ruth was born to Frank W. and Edna Lenore Flowers Smith on a farm near Vincent on September 28, 1923. She graduated... View Obituary & Service Information

The family of Ruth Darleen Trotter created this Life Tributes page to make it easy to share your memories.

Send flowers to the Trotter family.