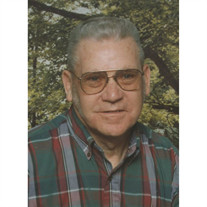 Thomas Oscar Ryan, 89, of Fleming, OH, died Monday, May 4, 2015, at Genesis Parkersburg Care Center. He was born November 26, 1925 in Phoenix, VA to John and Jesse Dulaney Ryan. On March 17, 1948, he married Carol Bond at McArthur, OH, with Rev. H.L. Weir performing the ceremony. He was a U.S. Army veteran of World War II, serving with the 99th Infantry. Thomas had been a POW, being captured in the Battle of the Bulge. Because of his military service, he received his honorary high school diploma at Warren High School in 2002. He retired as a truck driver from Broughton Dairy, following 25 years of service and later worked for Curry Trucking and Seaman General Store. Thomas had worked and farmed all of his life. He was a life member of VFW Post 5108 in Marietta. Thomas is survived by his daughter, Peggy Jo Cox of Layman, and his son, Paul Ryan (Cathy) of Fleming; two grandchildren, Mark Goudy of Columbus and Jessica Ryan of Kent State; four step grandchildren, Crystal Merrow of Fleming, Michell Bruce of Parkersburg, WV, Stephanie Roberts (Brian) of Bartlett and Rodney Cox of Indianapolis, IN; four step great grandchildren, Michael, Rachal and Dylan Merrow and Dwayne Singer, a step great great granddaughter and several nieces and nephews. He was preceded in death by his wife on January 20, 2010, a sister, Louella Finkel and a son in law, Larry Cox. Funeral services will be held at 11:00 a.m. on Thursday, May 7, 2015, at the Barlow Chapel of Cawley & Peoples Funeral Home. Burial will be in Barlow Central Cemetery, with full military rites. Friends may call on Wednesday from 2 to 4 and 6 to 8 p.m. Donations may be made to the Barlow VFD, P. O. Box 121, Barlow, OH 45712. The family would like to thank the staff Genesis Parkersburg Care Center.

The family of Thomas Oscar Ryan created this Life Tributes page to make it easy to share your memories.

Send flowers to the Ryan family.