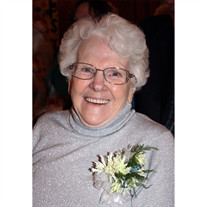 Our precious mother, Tina Eleanore Palmer, 80, of Cutler, Ohio, passed to her eternal home on Saturday, December 31, 2016, at her daughter's home in Worthington, Ohio. Mom was the epitome of love. She had a heart bigger than anyone I've ever had the honor of knowing. She loved God. She loved her family, both immediate and those far flung, barely connected individuals who came to her more by marriage or happenstance than by blood. Mom was an amazing woman. She was "Aunt Tina" to literally everyone who knew her. Many were indeed her nieces and nephews but many more had no more connection than having gotten to know her and feel the love coming from her. She wanted a family of boys. But God blessed her and Daddy with only one son who was lost too soon in a motorcycle crash at age 17. God did give her four daughters though and the opportunity to help raise and influence many others. Among them were Lovell Hackney, Homer Bigler, Kenny Huffman, Anna White, and the one we call our brother, Craig Lochary. I don't think Mom ever met an ornery little boy she didn't fall in love with. She would have taken them all in and adopted each and every one but their real parents might have objected. Mom had a way of making everyone feel like they were the most important person in the world when they talked to her. And at that moment I think they probably were. She always said her favorite grandchild was the one standing next to her at the time. Mom always wanted to be a nurse but she had 5 kids by the time she was 25 so she never got the opportunity. After we were all grown she started working as a private home care provider. She had many clients over the 38 years she provided this service. Mom didn't like conflict but she was no pushover either. She once threatened to quit a job caring for Mr. Dickson because of the callous language he used. He must have believed her because he quit using the words she objected to and she took care of him for many years till he passed away. Our mom was a wonderful, happy, loving, and giving soul. She lived a long and prosperous life. She wouldn't want anyone to cry over her passing. She would want us all to smile, hold our heads up high, shoulders back, strong, and proud. She would want us to go out into the world and spread the love to others that she so gladly gave to us. This alone will keep her light shining forever. Tina Eleanore Southall Palmer was born on February 29, 1936 in Statts Mills, WV, to Floyd Wilson and Tina Glendola Casto Southall. Tina was a 1954 graduate of Ripley High School and married Paul William Palmer on June 6, 1954. She is survived by three daughters, Ella Bogard-Benedict (Nelson) and Alice Hoon (Jerry) of Cutler, Alcy Spitzer (Brad) of Worthington; son in law, David Shepherd (Connie) of Reese, Ohio; Craig Lochary (April) of Fleming, whom she helped raise. She has six grandchildren and six great-grandchildren, Meshaum Roark (Phil) children Mackenzie, Jacob, and Jack of Delaware, OH , Sasha Bogard of the US Coast Guard, Miami Beach, FL, Sara Wentz (Chan) daughter Maisie of Columbus, Chad Hoon (Elisabeth) daughter Taylor of Cutler, Brandy DuBard (David) daughter Mira of Worthington and Ashley Adams (Zeke) of Grove City; two brothers, E.W. Southall (Helen) of Ripley, WV and George Southall (Frances) of Atlanta, GA; and many beloved nieces and nephews. She was preceded in death by her parents; husband, Paul; son, Ronald; daughter, Paula Shepherd; four sisters, Mary Olive Smith, Eudora Coon, Evelina Young, and Viola Tyree; and two brothers, Charles Southall and Carl Southall. Funeral services will be at 11:00 a.m. on Wednesday, January 4, 2017 at the Barlow Chapel of Cawley & Peoples Funeral Home, with Pastor Lou Whitney officiating. Burial will follow at Bartlett Cemetery. Visitation will be on Tuesday, from 2 to 4 and 6 to 8 p.m. at the funeral home. Donations may be made to the Layman United Methodist Church, c/o Pastor Lou Whitney, 722 Fourth Street, Marietta, Ohio 45750.

Our precious mother, Tina Eleanore Palmer, 80, of Cutler, Ohio, passed to her eternal home on Saturday, December 31, 2016, at her daughter's home in Worthington, Ohio. Mom was the epitome of love. She had a heart bigger than anyone I've ever... View Obituary & Service Information

The family of Tina Eleanore Palmer created this Life Tributes page to make it easy to share your memories.

Send flowers to the Palmer family.