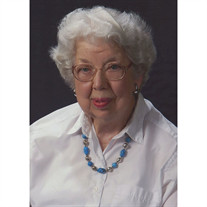 Dr. Virginia Marie Branson, 97, of Williamstown, West Virginia, died Friday, February 24, 2017 Brookdale Senior Living. She was born on January 3, 1920, in Columbus, Ohio to the late Helen Ray and Clifford Watson Branson. Virginia lived in Tucson, Arizona and moved to Monrovia, California, where she graduated high school and did her undergraduate work at Citrus Junior College. She received her masters and doctorate at Ohio University, where she graduated Phi Beta Kappa. Virginia was also affiliated with Marietta College. She served her country in the Navy during WWII. She was very proud of her enlistment in the WAVES, Women Accepted for Volunteer Emergency Service. Virginia taught at the college level in Connecticut and Pennsylvania colleges as well as Marietta College. She was a professor of Speech Therapy. Virginia is survived by a cousin, Margaret Hardesty of McConnelsville, Ohio. She was very close to the women of the Methodist church in Williamstown, and they were her family. She was close to her very special friend, Jean Pickering for many years. Hannah's house, Marietta Center & Rehab, Brookdale, as well as Marietta Hospice are all to be commended for their kindness and care of Virginia over the past several years. Memorial services will be held at 11:00 a.m. on Saturday, May 13, 2017 in the chapel of the First United Methodist Church, with the Rev. David Calvert officiating. At her request, her remains will be with her parents in Mountain View Cemetery in Altadena, California. Memorial contributions may be made in her memory to Marietta Hospice and Williamstown First United Methodist Church.

The family of Virginia Marie Branson created this Life Tributes page to make it easy to share your memories.

Send flowers to the Branson family.