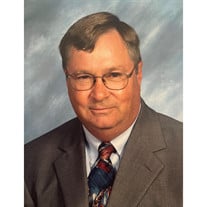 William "Bill" Fuger Cusack, Jr., 75, of Marietta, Ohio, died on Sunday, January 17, 2021 at Marietta Memorial Hospital. He was born on March 6, 1945 in Orange, NJ, to the late Julia McFadden Cusack and William Fuger Cusack, Sr. Bill was a 1963 graduate of Steubenville High School, received his Bachelors of Science from West Point and also attended Ohio University and Marietta College. He served his country in the U.S. Army, serving during Vietnam. Bill retired in 2010 as General Manager of Dover Parkersburg Steel, after 34 years of employment. He was a member of First Presbyterian Church in Marietta, Marietta Noon Lions Club, MOV Chamber and the Moose in Parkersburg. Bill loved golfing and going on walks. He enjoyed his vacation with family to Myrtle Beach. Bill enjoyed traveling and was proud to say he has been to all 50 states. He was a very involved father and grandfather, and loved his family unconditionally. He is survived by his significant other, Ann West; two children, Tamara Mitchell (Scott) and William F. Cusack, III (Kate); five grandchildren, Emily, Bryan, Cora, Grace and Jake; sister Ann Carruthers; and many nieces and nephews. He was preceded in death by his parents; infant son, Jeffrey Cusack; and sister, Julia Levy. Visitation will be on Thursday, January 21, 2021 from 2 to 4 p.m. at the Marietta Chapel of Cawley & Peoples Funeral Home, Ohio. Private memorial services will held as well. Burial of his ashes will be in Union Cemetery in Steubenville, Ohio at a later date. Masks will be required and social distancing will be observed. Number of people at one time in the funeral home will be monitored. In lieu of flowers, donations may be made in his memory to the Marietta Noon Lions Club P.O. Box 27, Marietta, Ohio 45750 or Make a Wish Foundation of America. Cawley & Peoples is honored to serve Bill's family and offers online condolences as well as many other resources by visiting their website, CawleyandPeoples.com.

The family of William Fuger Cusack created this Life Tributes page to make it easy to share your memories.

Send flowers to the Cusack family.