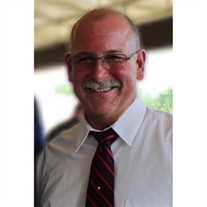 Scroll down to end of obituary for a video of Bill's service. William "Bill" Clark Rankin, III, 60, of Lowell, Ohio, died peacefully on November 18, 2020, surrounded by his loving family. He was born on April 3, 1960 in Marietta, Ohio, to Dr. William Clark Rankin, Jr. and Barbara Anne Householder Rankin. Bill grew up wreaking havoc in Devola; he graduated from Marietta High School in 1979 and gained welding experience through trade schooling. He began working at the young age of 16 for First Colony of Marietta and then Mole-Master. His outstanding work ethic led him to Waterford Tank & Fabrication, where he started in 2012, and worked for the remainder of his life. He always cherished the work and relationships created during his career. Our family greatly benefited from "Mr. Versatile", and his ability to tear apart and fix anything. His knowledge and skill extended beyond being a builder/fixer-upper. Bill's love for waterskiing fueled his passion for teaching others this skill. He participated in waterski acts as part of the entertainment for the Marietta Sternwheel Festival in the early 1980's. He enjoyed boating, fishing, hunting, four wheeling, and being with his friends and family. Bill also found joy in experimenting with smoking meat, using Barb and Carly as taste testers until he reached 'perfection' and could share the food with his family and friends. Bill was a long-time member of the Marietta Boat Club. Devoted to his community, he served as president of the EMCA and worked tirelessly on the Devola pool every year. Bill was a faithful Christian and lifelong member of the First Presbyterian Church, having served as an ordained Elder. He is survived by his wife, Barbara Ann Moody Rankin, whom he married on April 23, 1988; daughter, Carly Rankin of Westlake, Ohio; sister, Kimberly Reinhold (James) of Cincinnati, Ohio; nieces and nephews, Matthew Reinhold (Courtney), Ellen Reinhold (Jack Riley), Logan Moody (Beth) and Katherine Lappala (Cody); great nieces and nephews, Lily Reinhold, Oscar and Laird Moody, and Boaz Lappala; mother in law, Marilyn Moody of Marietta; brother in law, Phil Moody (Lou) of Louisville, KY; sister in law, Annette Moody (Alex Randow) of Chicago, IL; and his dear friend and 'brother', Kevin Joyce. He was preceded in death by his parents; and father in law, Lawrence Gilbert "Gib" Moody. Funeral services will be privately held, with The Rev. David Smith officiating. Burial will be at Putnam Cemetery. The service will be videoed and added to the funeral home's website. Visitation will be on Sunday, November 22nd from 2 p.m. - 5 p.m, at the Marietta location of Cawley & Peoples Funeral Home. Masks will be required, and social distancing will be observed. The number of people in the funeral home at one time will be limited as well. Donations in his memory may be directed to the Marietta Community Foundation, 100 Putnam Street, earmarked for the East Muskingum Civic Association, or to First Presbyterian Church Memorial Garden, 501 Fourth Street. Cawley & Peoples is honored to serve Bill's family and offers online condolences as well as many other resources by visiting their website, CawleyandPeoples.com. Special thank you to Dr. Kelli Cawley, her team, and the staff and volunteers at Strecker Cancer Center, all who treated our family as their own. We also want to extend our gratitude to our Waterford Tank & Fabrication family for their love and support. Thank you Christ for placing this loving man in our lives. We are forever grateful for all of the moments we have shared and the lasting impact he has had on us all.

Scroll down to end of obituary for a video of Bill's service. William "Bill" Clark Rankin, III, 60, of Lowell, Ohio, died peacefully on November 18, 2020, surrounded by his loving family. He was born on April 3, 1960 in Marietta, Ohio, to... View Obituary & Service Information

The family of William Clark Rankin created this Life Tributes page to make it easy to share your memories.

Scroll down to end of obituary for a video of Bill&#39;s service....

Send flowers to the Rankin family.