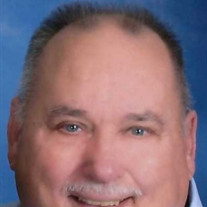 William Louis “Bill” Rice, 80, of Marietta, Ohio passed away on August 28, 2021, at Marietta Memorial Hospital surrounded by his family. Bill was born on December 28, 1940 in Marietta, a son of Norman Edward and Geneva (Morgenstern) Rice. He graduated from Marietta High School in 1959, where he excelled at playing football. He served in the U.S. Army during the Vietnam era as a helicopter crew chief, and retired from the Ohio Department of Highways as Superintendent. Bill had also worked for the City of Marietta. He was a member of The Basilica of St. Mary of the Assumption, Marietta Jaycees and American Legion Post 64. Bill enjoyed farming, camping and being involved with his family and their friends, especially the children. He is survived by his wife, Brenda (Weber) Rice: daughter, Stacy Lee, of Marietta: 2 grandchildren, Jared Lee, of Marietta and Breanna Grassie (Patrick) of Atoka, TN: 3 great-grandchildren: Annabelle, Jackson and Josephine: 4 sisters: Joan Richards (Larry) and Theresa Seese (Bill), all of Vero Beach, FL, Caroline Vargas, of Houston, TX and Selma Jeannette Farmer of Pamplico, SC. In addition to his parents, Bill was preceded in death by sisters: Sarah Louise Rice and Mary Evans. Visitation will be on Tuesday, August 31, 2021 from 11:00 to 12:00pm, at the Marietta Chapel of Cawley & Peoples Funeral Home. Funeral Liturgy with Mass will be at 1:00 pm at The Basilica of St. Mary of the Assumption with The Rev. Msgr. John Michael Campbell celebrating. Burial will be in New St. Mary’s Cemetery with Military honors at a later date. Donations may be made in his memory to the St. Mary’s Women’s Club, at 506 4th Street, Marietta, Ohio 45750. Cawley & Peoples is honored to serve the Rice family and offers online condolences as well as many other resources by visiting their website, CawleyandPeoples.com or by going to their Facebook page.

The family of William Rice created this Life Tributes page to make it easy to share your memories.

Send flowers to the Rice family.